The Chinese term kung fu isn't just about martial arts, as it describes any individual accomplishment or refined skill that is achieved after hard work (Kung Fu). In that sense, the actual term kung fu can be used to describe any skill obtained in such a manner, not just those of the martial arts variety. Still, kung Fu is widely used to describe a significant portion of the Chinese martial arts in the contemporary world. In this sense, the term is representative of highly varied martial systems that are somewhat difficult to trace. This is something that sets the Chinese arts apart from the majority of martial arts systems, where a clearer lineage is often known.

China became the center of the martial arts universe in 2600 B.C. In 2000 B.C., Emperor Huang Di was noted to be a shuai jiao (wrestling) and pole-fighting expert and had his troops learn martial arts. Mongolian tribesmen introduced a violent style of skull-bashing wrestling to China around 770 B.C.; this art is believed to be the progenitor of sumo. During the Han and Qin dynasties (256 B.C.-A.D. 220), this wrestling style was combined with kemari (a kicking game designed to strengthen one’s feet for war) to creat eshubaku.

Yet the origin of today’s Chinese martial arts began in 527 A.D. when Indian Monk Ta Mo arrived at the Shaolin Temple in the Henan province and taught the monks the 18 Buddhist Fists, which evolved into the Five Animal Styles of Shaolin. While Tao Mo’s influence has inspired many Chinese and non-Chinese martial arts, others have evolved independently.

The Theory of Kung Fu

Defensive and attacking movements are the essential ingredients. Folk wushu enriched itself by absorbing inputs from military wushu and grew. The people’s heroes, Yue Fei (in Southern Sung), Qi Jiguang (Ming) and Yu Dayou (Ming), etc., are the important figures who promoted the interactions of military wushu and folk wushu.

Traditional Wushu and religions are as interconnected as flesh and blood in a body. Many folk stories circulate about legendary martial arts events. In past times, many folk Wushuists and Wushu practitioners defeated foreign boxers and strong men. They won glory for the country, washed away the shame of being the sick man of Asia, and renewed the good spirit of the nation.

China has a long history of martial arts traditions that includes hundreds of different styles. Over the past two thousand years many distinctive styles have been developed, each with its own set of techniques and ideas. There are also common themes to the different styles, which are often classified by "families" (家; jiā), "sects" (派; pai) or "schools" (門; men). There are styles that mimic movements from animals and others that gather inspiration from various Chinese philosophies, myths and legends. Some styles put most of their focus into the harnessing of qi, while others concentrate on competition.

Chinese martial arts can be split into various categories to differentiate them: For example, external (外家拳) and internal (内家拳). Chinese martial arts can also be categorized by location, as in northern (北拳) and southern (南拳) as well, referring to what part of China the styles originated from, separated by the Yangtze River (Chang Jiang); Chinese martial arts may even be classified according to their province or city. The main perceived difference between northern and southern styles is that the northern styles tend to emphasize fast and powerful kicks, high jumps and generally fluid and rapid movement, while the southern styles focus more on strong arm and hand techniques, and stable, immovable stances and fast footwork. Examples of the northern styles include changquan and xingyiquan. Examples of the southern styles include Bak Mei, Wuzuquan, Choy Li Fut and Wing Chun. Chinese martial arts can also be divided according to religion, imitative-styles, and family styles such as Hung Gar (洪家). There are distinctive differences in the training between different groups of the Chinese martial arts regardless of the type of classification. However, few experienced martial artists make a clear distinction between internal and external styles, or subscribe to the idea of northern systems being predominantly kick-based and southern systems relying more heavily on upper-body techniques. Most styles contain both hard and soft elements, regardless of their internal nomenclature. Analyzing the difference in accordance with yin and yang principles, philosophers would assert that the absence of either one would render the practitioner's skills unbalanced or deficient, as yin and yang alone are each only half of a whole. If such differences did once exist, they have since been blurred. 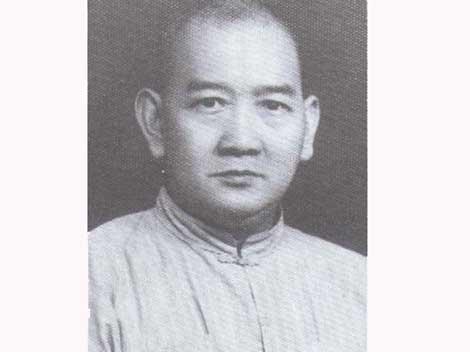 Wong Fei Hung (黄飞鸿) (1847–1924) was a martial artist, a practitioner of traditional Chinese medicine, and revolutionary who became a Chinese folk hero and the subject of numerous television series and films.

As a healer and medical doctor, Wong practiced and taught acupuncture and other forms of traditional Chinese medicine at "'Po Chi Lam", his clinic in Foshan, Guangdong Province, China, where he was known for his compassion and policy of treating any patient. A museum dedicated to him was built in Foshan.

Amongst Wong's most famous disciples were Lam Sai Wing, Leung Foon, Tang Fung, and Ling Wan Gai. He was also associated with Chi Su Hua, aka Beggar So. 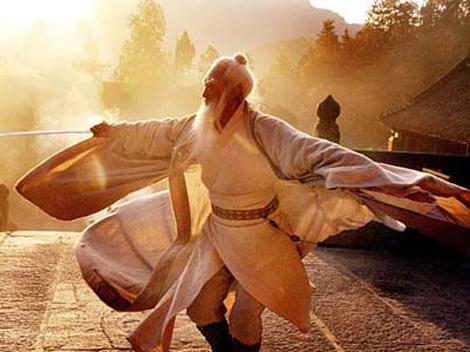 Zhang Sanfeng (张三丰) was a semi-mythical Chinese Taoist priest who is believed by some to have achieved immortality, said variously to date from either the late Song Dynasty, Yuan Dynasty or Ming Dynasty. His name is said to have been Zhang Junbao ,before he became a Taoist.

Zhang was indifferent to fame and wealth. After declining official position and dispatching his property to his clan, he traveled around China to live the life of an ascetic. Zhang spent several years at Hua Mountain before settling in Wu Tang Mountain. 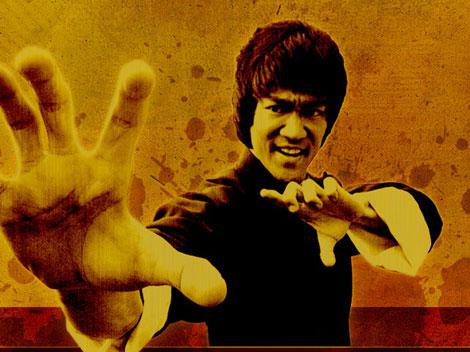 Bruce Lee (李小龙), a great master of Chinese martial arts, is also a famous and influential action movie actor both at home and abroad. As the pathfinder of action movies, Bruce Lee disseminated Chinese Kung Fu to the whole world. Bruce Lee is the first Chinese who goes to Hollywood, pushing forward the development of martial arts and action movies. 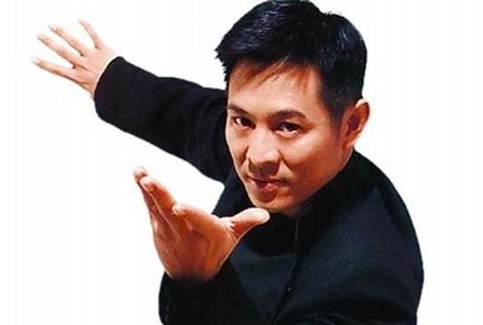 Jet Lee is famous for his authentic Shaolin Kung Fu. He has acted as many degage righteous chivalrous men in lots of famous films. Jet Lee has won the best actor in the 27th Hong Kong Film Awards, and won 2008 You Bring Charm to the World Award. 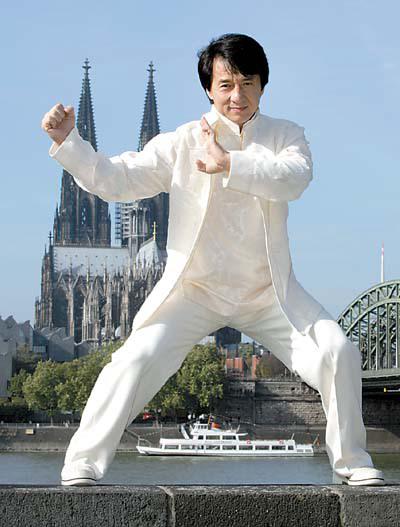 Jackie Chan (成龙) is an outstanding martial artist famous across the world, whose films are loved by audiences of all ages. His breathtaking action, excellent driving skills and unique humor impress people a lot. Many of Jackie Chan’s movies can be ranked as Hong Kong 's biggest-grossing movies. 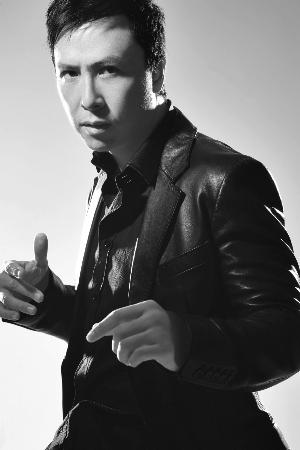 Donnie Yen (甄子丹), born in a martial arts family, is the idol of numerous young people for his wonderful Kung Fu and good shape. He is a martial arts generalist who can digest Chinese and western martial arts. Donnie Yen has given perfect performances in many Kung Fu movies for both his Kung Fu and outstanding acting skills. 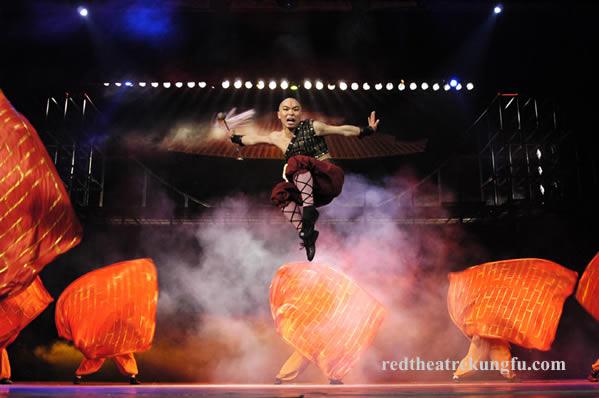 The Legend of Kung Fu-ChunYi

The show has been performed more than 3,000 times around the world (The United Kingdom, China, Canada, Russia and Japan) and has pleased more than two million fans. It was chosen as the main show for the 2008 Beijing Olympics.

The story follows a fearful, young boy named Chun Yi as he enters into the apprenticeship of a Buddhist monk. Under the teachings of a wise master, he struggles against distractions as he tries to find the dedication to adapt to the strict disciplined lifestyle. Along the way he learns the skills of martial arts and studies hard collecting vital life energy.

The Legend of Kung Fu is filled with acrobatic stunts, brilliant martial arts displays and emotion filled dancing. This performance is a unique opportunity to experience the magnificent scenery, lighting, sound and special effects as the story unfolds. You'll learn the amazing transformation that Chun Yi goes through during his life.