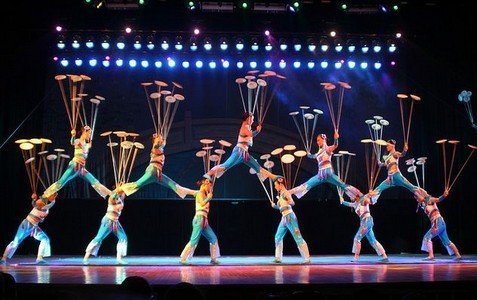 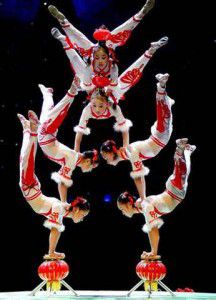 The acrobatic art has 2000 years of history in the China. Acrobatics is called the "opera" in the Han Dynasty, Sui and Tang Dynasties called "San Yue", and it is called acrobatics after the Tang and Song dynasties in order to distinguish it from other dance and drama.

Beijing acrobatics is called a national art. It is one of the art forms popular among the Chinese people. Whether you are old or young, educated or illiterate, you can appreciate it as long as you can see. There is no language barrier and cultural border.

Chinese Acrobatic art has its own features. The performance is very depictive,so the requirement for lighting is much stricter than opera. A successful acrobatic show also requires beautiful clothing. Costumes further enhance the beauty of the performance and increase the visual effects.

This kind of art is still what it was centuries ago in that it does not over emphasize the role of music. Performers pay more attention to the action, and he music perfectly coincided with the performance,the high level acrobatic program needs excellent technique coaches and much prepration time before it is ready . When you watch a Chinese acrobatics show, you are strongly impacted both mentally and physically. It is truly and unforgettable experience.

At present, Chinese Acrobatics have developed into a kind of performance art. There are over 124 acrobatic teams above the county level,and chinese acrobatics has won praise from audiences both at home and abroad, and Chinese acrobats won many gold medals in World Acrobatic Festivals in recent years.