If you’ve seen everything you planned in Beijing but still have a few days in China then you should definitely take our Tianjing tour. It’s a great one-day trip for you and your companions to the territory that only 4,000 years ago used to be the bottom of the sea! 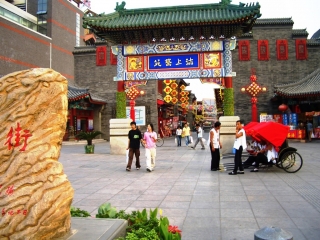 Tianjing is just about 125 km from downtown Beijing (2 hours by bus or just 30 minutes by a fast train). The city was founded in the 13th century and has a long history as a commercial and textile center. Few tourists come here though, which is good if you prefer enjoying the sights without crowds of people surrounding you. The prices here are reasonable for the same reason, too.

There’s quite a lot to see and do in the city all year round because the weather is perfect for touring the place. The Tianjing’s architecture is an interesting mix of Chinese and European: once a lot of French, English and German soldiers and their families used to live here. The main attractions include Five-Avenue Area, Tianjin Eye built over a bridge, Jing Garden, the Mansion of Family Shi and the Ancient Cultural Street, of course.

The city is neat and well-organized. It has been called the most comfortable city for living of continental China. Local people swim in the river and sunbathe on the banks, and the police ride bicycles!